Join us for our 2022 Padre Pio Pilgrimage! 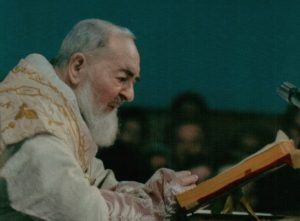 Depart on your overnight flight to Catania.  Dinner served in flight.

Upon arrival Catania, you are met by your guide and driver and transferred to Siracusa. The remainder of the day is free.

This morning we visit the Basilica of Madonna delle Lacrime which holds the plaque of Our Lady of the Tears. From August 29th to September 1st, 1953, a plaster plaque of the Immaculate Heart of Mary, placed over the headboard of the bed of a young couple, Angelo Iannuso and Antonina Giusto, shed human tears. The phenomenon took place inside and outside of the house. Many, saw, touched, gathered and tasted the salt of those tears.

After Mass we visit the wonderful city of Siracusa where historic cultures are evident in the narrow streets and lovely courtyards of the old houses. It is the birthplace of Archimedes, and at one time, it rivaled, Athens as the most important city of the Greek world.

Our first stop is the Church of St. John the Baptist. It is the oldest church in the West, second in age only to its Eastern counterpart located in Antioch, Turkey. In its crypt, Saints Paul and Luke were said to have preached to the Christian community.

Next, we visit Ortiga Island where we find the Duomo which is one of the town’s most celebrated sights. The building records the many ages of the town. Once it was the Greek Temple of Athena, with a giant gold statue of the goddess on its roof. The massive Doric columns of the temple are still visible. The wall above the columns along Via Minerva, with battlements, is Norman in origin, while the Baroque facade was a replacement after the 1693 earthquake. Inside the Duomo, you can see more evidence of the temple origins of the building, and more of the original structure. Inside we see the relics of St.  Lucy in a small room is the shrine to Santa Lucia, the patron saint of Siracusa. St. Lucy is loved so much that Siracusa awards her two festivals a year, in May and in December, with the saint’s statue being ceremonially removed from her side-chapel and placed in front of the main altar, before a succession of traditional festivities and the carrying of the statue through town in a colorful procession.  Siracusa became a World Heritage Site in 2005.

Ancient Akragas, in its hey-day, was a flourishing cultural center: it gave the world Empedocles, the pre-Socratic philosopher, whose concept of matter was divided into four elements, Earth, Air, Fire and Water, was the foundation of science for many centuries to come. The city attracted poets like Simonides and Pindar who described it as “the most beautiful of mortal cities”.  After our visit we continue to Siracusa for dinner and overnight.

After Mass at Madonna delle Lacrime, we depart to Cosenza. En route we stop at Taormina. We are transferred to the upper city where we will be free to have lunch, on our own, walk around the city and just enjoy the views of Mount Etna. Taormina is a jet set town and this is evident in the local boutiques and jewelry shops. Take time to visit the Greek Theatre.

Teatro Greco – Taormina’s historic theater owes much of its present appearance to the Romans, the Greeks’ successors in Sicily. Designed with an unsurpassable backdrop of blue sea, coastline, distant smoking Etna, and inland mountains, the theater was begun by the Greeks in the third century BC. In the first century AD, when Taormina was a significant Roman town, the Romans adapted the theatre to suit their more barbaric spectacles, stripping out seating to make more room for gladiatorial shows. It would be hard to beat the views from Taormina on a clear day. Some of the best places for enjoying the vista are the panoramic terrace of Piazza IX Aprile on Corso Umberto. After our visit we follow the Mediterranean Coast arriving at Messina.  We board our ferry to cross the Straight of Messina.  Upon arrival at the port of Villa San Giovanni, we continue along the Coast of Calabria en route to Cosenza.

Morning depsrture to San Giovanni Rotondo. En route we stop at Pietrelcina, birthplace of Padre Pio. We visit Padre Pio’s home, the Church of Santa Ana, where he was baptized, and we have Mass at Santa Maria degli Angeli.  Next, we stop at Piana Romana to visit the place where Padre Pio received the invisible stigmata. After Mass and our visit, we continue to San Giovanni Rotondo.

Today we visit the Basilica of Santa Maria delle Grazie and the Chapel of the old Church where Padre Pio said Mass. Next, we visit the English Office for a talk on Padre Pio.  After our visit, we visit the new Church of St. Pio of Pietrelcina to see Padre Pio’s Tomb.

Today is the feast day of Padre Pio. We spend our day following the program of the Basilica for Padre Pio. This afternoon, we visit St. Michael’s Cave where St. Michael the Archangel appeared.

First Apparition The first apparition, known as the bull episode, is dated 490; it is the most astonishing and tells the story of a rich lord who went in search of a bull of his herds, lost in the Gargano area; at last he found it on the top of the mountain kneeling down at the opening of a cave. Filled with anger, he shot an arrow against the rebellious animal, but instead of hitting the bull the arrow unaccountably wounded the foot of the wealthy man.

Upset by the event, he went to see the Bishop who, after listening to the account of the extraordinary adventure, ordered three days of prayers and penance. As the third day ended, the Archangel Michael appeared to the Bishop and spoke to him: “I am the Archangel Michael and I am always in the presence of God. This cavern is sacred to me, I have chosen it; I myself am its watchful custodian… There where the rock opens wide the sins of men can be forgiven… What is asked here in prayer will be granted. Therefore, go to the mountain and dedicate the grotto to the Christian religion”.

Second Apparition The second apparition, known as the victory episode, is linked to a memorable victory of the town of Siponto against the enemy troops; the complete victory, foretold by the Archangel during His apparition to the holy Bishop Lawrence Maiorano, took place on May 8th and the Longobards attributed it to the intercession and help of the Archangel.

Third Apparition The third apparition, also called the Dedication episode, is linked to the beginning of the cult on the Gargano when all the Apulian bishops went in procession to the holy grotto  and they found that a primitive altar had already been erected, as announced by the Archangel to Lawrence Maiorano; moreover, according to the legend, they found St. Michael’s footprint in the rock.

Gargano is one of the most advanced eastward land of Italy and so, thanks to its geographical position and the fame acquired for these apparitions, the Byzantines held it under their dominion together with some other regions of the Adriatic coast.

During this period the Sanctuary structure was very different from the current one.Pilgrims arrived at the shrine from the Carbonara valley through a portico and a gallery that gave on to the irregular and deep cavern.

Then, in this period, according to the oriental liturgy, St. Michael was venerated as the one who presents the souls of dead to the divine throne and as a healer of illnesses (Apollo was a healer god) rather than as a great warrior.

It was very famous the so-called “drop”: a miraculous water that dripped from the rock of the cavern and, according to the tales, healed every kind of diseases.

Morning departure to Rome. En route we stop at Morcone to see the convent where Padre Pio entered the Capuchin order. In 1901 while in Piana Romana Padre Pio met Friar Camillo of Sant’Elia a Pianisi. It was this monk with the long, full beard who inspired Padre Pio to become a Capuchin Friar. In January 1903, two years after meeting with Fr Camillo, Francesco entered the convent of Morcone. He was met at the door of the convent by Fr. Camillo. After our visit, we continue to Rome.

This morning we have a “Tour of the Four Major Basilicas of Rome” – St. Peters’, St. Mary Major & St John Lateran. We also see the Roman Forum, the Coliseum and the Monument to Victor Emmanuel, Piazza Navona and the Trevi Fountain.

Morning departure to Rome airport for our return flight to the USA.